Critical theory has always challenged the division between theory and practice. At its best, it aims to turn contemplation into emancipation, seeking to transform society in pursuit of equality, social justice, and human flourishing. Yet today’s critical theory often seems to engage only in critique. These times of crisis demand more. They demand critical praxis.

Critique & Praxis challenges us to move beyond decades of philosophical detours and to harness critical thought to the need for action. In a time of increasing awareness of economic and social inequality, it calls on us to engage in critical practice to make society more equal and just.

Critique & Praxis advocates for a new path forward that constantly challenges each and every one of us to ask what more we can do to realize a society based on equality and justice. Reflecting on decades of activism, social-justice litigation, and political engagement, and years of critical theory and philosophical work, Critique & Praxis charts a vision for political action and social transformation. Instead of posing the question, “What is to be done?” we must now turn back onto ourselves and ask, and answer, “What more am I to do?”

“A relentlessly honest and learned exploration of how critical theory can turn again to the task of changing the world. Learning from above but assiduously from below, the activist legal scholar Harcourt utilizes illusion and value, makes theory and practice collide, and asks: ‘What more am I to do?’ Required reading.”

—Gayatri Chakravorty Spivak, author of Can the subaltern speak?

“Harcourt’s pragmatic and comprehensive dissection of philosophy and the quest for social justice is timely, provocative, and critically needed in this moment of global uncertainty, endless conflict, and pervasive inequality.”

—Bryan Stevenson, author of Just Mercy: A Story of Justice and Redemption

“With his typical combination of erudition, eloquent argument, and theoretical clarity, Bernard E. Harcourt now gives us a complete account of his reading of contemporary critical philosophy, articulating it with immediate issues in the field of human rights and democratic politics. A tour de force that will give readers much to think about and much to learn. I will have it permanently on my desk, or not far.”

—Étienne Balibar, author of Secularism and Cosmopolitanism: Critical Hypotheses on Religion and Politics

“Has critical philosophy completed its mission or has it renounced the task to link theory and praxis in order to change the world? Harcourt’s response is unequivocal: the critical theory that emerged from the Frankfurt School has lost its bearing and separated theory from praxis. In this book, Harcourt transforms critical philosophy into a manifesto of ethical engagement.”

Bernard E. Harcourt is the Isidor and Seville Sulzbacher Professor of Law and Professor of Political Science at Columbia University and a chaired professor at the École des Hautes Études en Sciences Sociales in Paris. An editor of Michel Foucault’s work in French and English, Harcourt is the author of several books, including The Counterrevolution: How Our Government Went to War Against Its Own Citizens (2018) and The Illusion of Free Markets: Punishment and the Myth of Natural Order (2011). He is a social-justice litigator and the recipient of the 2019 Norman Redlich Capital Defense Distinguished Service Award from the New York City Bar Association for his longtime representation of death row prisoners.

Read a preview of the book here. 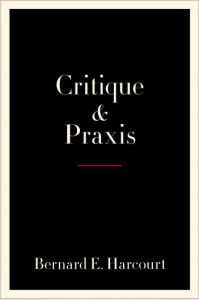